How to Handle Truck Driver & Delivery Driver Injuries with L&I

At Washington Law Center, we are very familiar with the injuries/occupational diseases suffered by truck drivers and delivery drivers. At any one time, we represent numerous workers injured in this line of work.Â  Whether itâ€™s climbing in and out of cabs, tying down loads, manipulating cargo during delivery or just the process of sitting while suffering over the road vibrations; truck driving and delivery drivers can take a tremendous toll on the body.Â  In addition, truck and delivery drivers are often the victims of motor vehicle accidents in which non-professional drivers cause injurious accidents to the professionals.Â  These are just some of the examples of ways professional truck drivers get injured or worn down over time.Â  Either way, a workersâ€™ compensation or Labor & Industries claim should be filed in Washington.

What You Need to Know as an Injured Truck Driver: 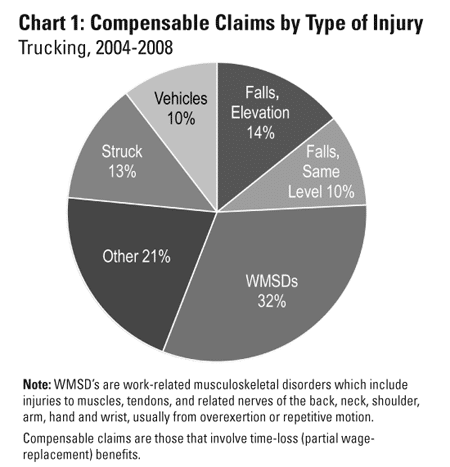 Truck drivers that are injured at work have a legal responsibility to immediately report their injury to their employer, per RCW 51.28.010.Â  In turn, the employer has a legal responsibility to immediately report that an injured worker is claiming an industrial accident or occupational disease, per RCW 51.28.025.Â  At the same time, the moment a work injury claim is filed, the Washington State Department of Labor & Industries or the employer may typically begin an aggressive and sophisticated effort in defense of that claim.Â  Why?Â  Because the truck driver injury rate is more than three times the injury rate of all other Washington industries combined! The expenses related to truck driver injuries and occupational diseases are also significantly higher on average than for other worker classifications.Â  Injury pensions (lifetime benefits) are more likely to result.Â  Accordingly, both the Department of Labor & Industries and affected employers typically mount substantial defenses against driver claims, including those in the North American Industrial Classification System (NAICS) classifications of 4841 (General Freight Trucking), 4842 (Specialized Freight Trucking), 492 (Couriers and Messengers) and 562 (Waste Collection).

What You Need to Do as an Injured Truck Driver:

Then, if you havenâ€™t already, call an attorney at Washington Law Center for help.Â  If all of this occurs after hours, call in sick the next morning and then speak to our attorneys for immediate guidance.

A man walks into our office to discuss a non-injury legal matter.Â  He is aging and stiff, obviously in physical discomfort.Â  When asked why heâ€™s struggling, he lists almost all parts of his body as just being â€śworn out.â€ťÂ  When asked what he does for a living, he responds that he is a truck driver, now working a â€śno-touchâ€ť delivery route because he can no longer manipulate loads or heavy packages.Â  He has had pre-existing injuries to many of his affected body parts, but never filed an Labor & Industries claim.Â  His employer had watched him decline over the years, but has not suggested using L&I.Â  Our attorneys immediately got him to an appropriate occupational medicine physician and, despite significant push-back from an L&I Claims Manager, helped him establish an occupation disease claim for a neck strain, lumbar strain, bilateral shoulder strain and bilateral knee strain.Â  As a result of our representation, this man has received more than $111,000 in time-loss benefits, additional money in Social Security disability insurance benefits, and may likely obtain a lifetime pension.

A woman is injured in Nebraska while sleeping as her co-driver was driving.Â  The co-driver was cut off by a reckless driver, causing the co-driver to evade in a way that threw our client into the wall of her sleeping compartment.Â  Our client was not a Washington state resident, nor was she injured in Washington, but her Nebraska workersâ€™ compensation claim was being contested.Â  We then helped her file and win a claim in Washington based on the fact that her employerâ€™s headquarters is in Washington.Â  She has since received significant benefits, including those which covered surgery expenses and time loss-benefits.Â  She continues to live out-of-state.Â  She is expected to receive significant permanent partial disability benefits at the end of her claim.

A truck driver suffered through many years of climbing into and out of a truck cab, constantly suffering strain on his knees.Â  One day, he slipped from the step as he was getting into his truck, causing him to strain his left knee.Â  The Department of Labor & Industries took the position that he had â€śpre-existingâ€ť knee arthritis, so the Department was not responsible for his total knee replacement.Â  Our attorneys plead theories of both occupational disease and acute injury. We successfully won his case, as well as his right to a total knee replacement covered under the L&I system.Â  He eventually received tens of thousands of dollars in time-loss and permanent partial disability benefits before he was able to successfully return to work.

If you are a truck driver or delivery driver and believe your work either caused or contributed to a significant medical condition (including â€śjoint painâ€ť), please give the attorneys of Washington Law Center a call.Â  We can and will help you.

Spencer Parr is an attorney/partner at Washington Law Center who specializes inÂ Washington labor & industries,Â social security disability, &Â time-loss benefits. He is experienced in working all across the US as he has worked cases in Washington, California, New York, & Arizona.Â Click here to learn more about Spencer Parr.